The world is flat!

So, I was listening to a Cosmos episode when Carl Sagan described the method that Eratosthenes used to calculate the circumference of the Earth. He stated that, on a flat Earth, with the light from a far-away object like the Sun all shadows would be the same length. Seeing different-length shadows, as Eratosthenes did in his famous Summer Solstice observation, allows you to infer curvature. But the big assumption here is that the light is coming from very far away. If we had a flat Earth, it is easy to set up a situation where the Sun, directly overhead in some place, casts a 7 degree angle 800 km away as Eratosthenes observed. 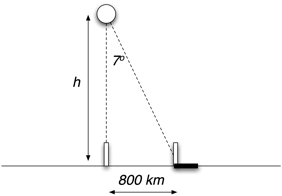 This simple arrangement results in a distance to the Sun of about 6500 km. The world is flat!

So, we have two different explanations of the observations. How do we distinguish between them? Answer: the way it is always done in science - spin out the consequences of each, and make predictions where they disagree.

It is easy to show that continuing this calculation would result in some striking predictions. First, given this distance, and the fact that shadows change over the day, the apparent size of the Sun would be very different from one location and another...and it is never observed to be different, even across years. This suggests a very distant Sun. Further, you’d have to make sure that the Moon was closer than the Sun (inferred from eclipses) in both models. Once you do this, then you have two objects with the apparent size problem in the flat-Earth model, again not supported by observation. There are probably many other predictions this model makes which could easily have been verified by the ancients, so it is no surprise that they did not consider it in their calculations.

It is useful, however, to think about the consequences of models beyond the data they agree with.
Posted by bblais at 8:52 AM