There is a tendency for scientists to be killjoys, raining on everyone parade, poo-pooing cherished beliefs and activities from acupuncture, religion, ufo’s, and homeopathy. Where is the wonder, the joy? I’ve had someone, after a particular session debunking UFO shows on the history channel, say “But wouldn’t it be great if they were true?” Yes! But I don’t want to give up intellectual honesty for wishful thinking. If it’s true, that’s great, but I won’t reduce my efforts to debunk it just because I’d love it to be true. In fact, wanting it to be true motivates me even more to be skeptical, knowing that I’ll be less critical of something I want to be true (as most humans are).

Here’s at least one piece of wonder in the Universe. See the Earth in this picture? 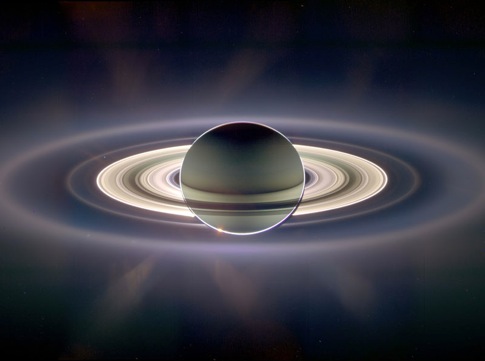 This is a picture of Saturn, with the Sun behind it, taken from the Cassini spacecraft. See that little white speck in the rings, in the upper left? That’s the Earth! There are two responses I have when seeing this picture.

1) We’re really small and insignificant in this Universe
2) What an amazing thing that we can create something on the Earth, send it a billion miles, and be able to take a picture of ourselves. That’s amazing!

The universe is amazing, both in its magnitude and complexity, and we should feel a sense of awe. All this, without introducing unnecessary constructs such as deities. Although science is often accused of arrogance, I can think of no humbler activity than that which brought us the picture above.