The Not-so-Hidden Flaw in this Climate Argument

There are sometimes people think that I am a global warming denier (I'm not), but I am not entirely convinced that the dire predictions from the global warming camp are supported by the evidence. I am skeptical of conclusions based entirely on models, and I am really skeptical of anything where I perceive less-than-open information exchange combined with vested interests and a lot of money. Given all of that, I feel free to rip apart anyone's argument regardless of which side they happen to be on. :) That's how science works!

So I was pointed to an article called "The Hidden Flaw in Greenhouse Theory" which has such flawed logic itself that I am surprised someone wrote it.

To summarize the article, I quote the last paragraph:

An idea has been drummed into our heads for decades: that roughly 1% of the atmosphere's content is responsible for shifting the earth's surface temperature from inimical to benign. This conjecture has mistakenly focused on specifically light-absorbing gases, however, ignoring heat-absorbing gases altogether. Any heated atmospheric gas radiates infrared energy back toward the earth, meaning that the dreadful power we've attributed to light-absorbing molecules up to now has been wildly exaggerated and must be radically adjusted -- indeed, pared down perhaps a hundred times. Because all gases radiate the heat they acquire, trace-gas heating theory is an untenable concept, a long-held illusion we'd be wise to abandon.

How does he come to such a grand conclusion? He starts with a quote of a NASA elementary school guide, which has:

Question: Do all gases absorb heat?
• Answer: No. Only some gases have the unique property of being able to absorb heat.

Then he (correctly) criticizes this guide saying

So how does NASA go wrong? By consistently confusing light and heat, as you see in the illustration below, where infrared light is depicted as heat.

Clearly NASA should have said that greenhouse gases absorb infrared light, or radiation.

Then the author continues with this:

Why does NASA go wrong? Because it has a flimsy yet lucrative theory to foist on the taxpaying public, that's why. As the space agency explains in the Main Lesson Concept, the core idea of greenhouse theory is that downward radiation from greenhouse gases raises the earth's surface temperature higher than solar heating can.

This is amazing. Regardless of ones stance on global warming, the greenhouse effect (badly named) is a well known, well established consequence of the basic laws of thermodynamics. Without it, Earth would be far less habitable!

To make this idea seem plausible, therefore, it's crucial to fix people's attention on the 1% of the atmosphere that can be heated by radiant transfer instead of the 99% and more that is heated by direct contact with the earth's surface and then by convection.

As a nitpick, it would actually be more like 5 percent or so, because water vapor is the most abundant greenhouse gas. Even so, his argument is fallacious, that a trace gas cannot cause significant warming. Let's take another example of a trace gas that increases atmospheric warming: ozone. In the stratosphere, at the "ozone layer", the concentration of ozone is about 2 to 8 parts per million. That is 0.0002%! Despite this trace amount, we get significant warming of the stratosphere as shown here.

His reasoning on this issue is

Consider too that since most air molecules are infrared-transparent, they can't be heated by the infrared that CO2 and water vapor emit. This means that downward radiation from "greenhouse gases" can only explain how the earth's surface might get warmer, not the rest of the atmosphere.

No one is suggesting that the non-greenhouse gases are being heated by the re-radiation of the greenhouse gasses. They are heated by the collisions with greenhouse gasses, thus raising the overall atmospheric temperature. This feedback loop continues until the new balance, with the surface, is established. It's strictly conservation of energy. Some is radiated, some is lost in collisions, and the gasses in the atmosphere as well as the surface adjust until an equilibrium temperature is reached. A simple process, really.

At the crux of his argument is this:

For meteorologists acknowledge that our atmosphere is principally heated by surface contact and convective circulation.

This is just wrong. What physicist do is follow the money, or the energy in this case. A very simple balance can be shown, quantified, and verified by numerous types of measurements. A very simple picture of it is here. 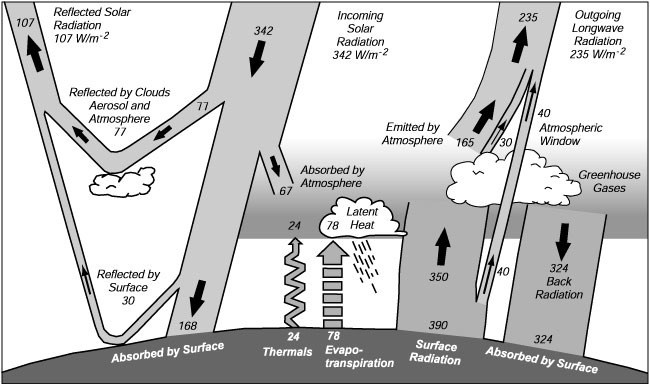 (From http://oceanworld.tamu.edu/resources/oceanography-book/radiationbalance.htm, which cites Houghton et al., (1996: 58), which using data from Kiehl and Trenberth (1996).)

It is a real challenge for people without science background to sift through things like this. It sounds like science, but it is incredibly wrong. One way to help tell the difference is to observe how the author responds to criticism. Concerning the errors, do they offer an errata or do they ignore them, or worse, inject ad-hominem attacks on the critic? Saying that NASA "has a flimsy yet lucrative theory to foist on the taxpaying public" is playing into people's distrust of government, and trying to use that to bolster an argument, without actually strengthening the argument itself. It is implying motive without substantiation. I could do that too by suggesting that the author is starting with an anti-global warming position, and wants to prop it up with whatever emotional verbiage he can get away with to hide spurious arguments. Instead, I simply show how elementary and spurious his arguments are, and predict that he will not submit any corrections. I can point out the ad-hominem attacks on NASA as unbecoming of a scientific argument, and is useful only in a propaganda piece.


Another way that someone might tell if the argument is sound, is what sorts of errors are being raised. If the errors are of a technical nature, like the benefits of particular statistical tests, then it can be hard for a non-expert to tell. However, if the arguments have basic errors that can be confirmed in encyclopedias then it is much easier to tell. If the arguments include non-scientific, emotional, exaggerated language then it is much easier to tell that it is a propaganda piece and not a scientific piece.

Are there other ways that non-experts in a field can decide the merits of arguments? Perhaps someone will comment and add some more, and perhaps I'll think of some more. Mostly, being able to skeptically think like a scientist, regardless of your personal belief in something, is the most important skill to use in cases like this. I think it is an important thing to consider, in order to better win over the public to science.
Posted by bblais at 6:12 AM