Magnetic therapy getting under my skin

Every year my family goes to the flower show in Providence. It's a nice time, seeing flowers in the middle of February, snacking on the pretzel and dip samples, and seeing all of the house and garden related vendors. It's tainted, however, by a particular vendor selling magnetic therapy items, such as bracelets, braces, and necklaces. The company is called Palmer's Global Magnetic Therapy, and I am bothered even writing their name here, giving them more exposure.

Their pamphlet has more science errors per square inch than any text I have ever read. For example, 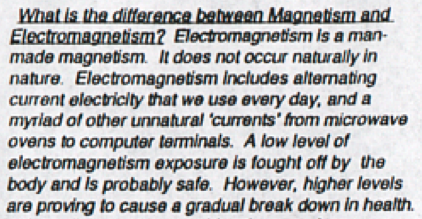 Given that light is electromagnetic radiation, and I believe that light has been around a bit longer than people (even by creationist standards!), this definition is flat-out wrong. Saying that low-levels are "fought off" by the body, yet "higher levels are proving to cause gradual break down in health" is at best misleading: high levels of radiation, such as high-energy x-rays, break down organic molecules, but you aren't generally exposed to this in such high dosages. Either way, it is irrelevant to magnetic therapy where the magnets used are of such low intensity that no significant effect would be expected anyway.

On the medical side, this pamphlet is just as bad. 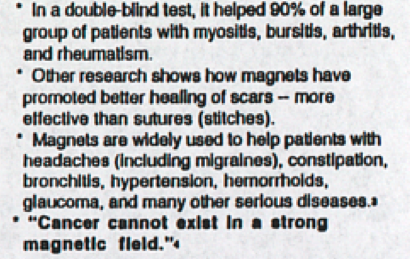 The previous points, about the medical effectiveness of magnets, is also not correct. Although it seems to be challenging to have a blinded study of magnetic therapy, because people can easily test to see if the magnetics attract keys or other household items, careful studies have not found any effect of magnetic therapy. You can see some of them here, here, a nice wikipedia summary, and another very good summary of some other arguments against magnetic therapy.

I could go on and on with this, but I want to highlight a few things directly related to pseudo-scientific thinking. The following statement is indicative of the sort of thing, not limited just to magnetic therapy but to all forms of sham-medical treatments and much of pseudo-science as well.

Rephrased, a bit bluntly, this reads: "if you do our treatment for your ailment, and your ailment improves, then that is proof of the effectiveness of our treatment. if it doesn't improve, then you did something wrong, and it says nothing about our treatment". It's like the psychics who complain that the room isn't right, or their abilities are hampered by skeptical treatment, but otherwise they are perfect. Heads, I win. Tails, you lose. James Randi has pointed this out many times, with the people trying for his million dollar challenge. It is the type of thinking that protects you from ever being wrong, and thus places your statements outside of the realm of science. Unfortunately, it also generally means you're wrong, and are simply trying to avoid critique to keep the comfort of your misguided ideas.

In order to avoid the FDA, they have to put a disclaimer in, which reads:

However, does this disclaimer allow them to state the things above (about cancer), or these claims: 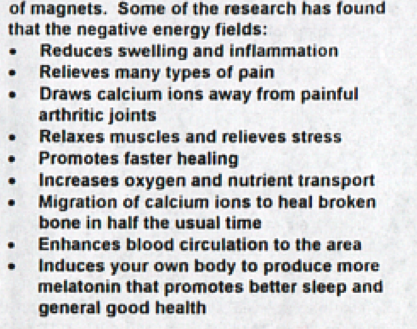 I'm no legal expert, but it seems to me that this is filled with medical claims, and simply stating "we are not making medical claims" should not be enough.

I see these people every year, and every year I wonder what should I do. What is my moral obligation, what are my legal limits, what are my options? Sometimes I ignore them, but always feel bad afterward. I have a gut feeling that I have a responsibility to help save as many people from this scam as I can, especially since it is right in my backyard. I see people at the booth, and it drives me nuts. I try to educate my students, and anyone around me who will listen, but that doesn't feel like enough.

One suggestion that someone had was to set up a booth of my own, an anti-magenetic therapy booth. I'm not sure if this would either be allowed, or might be taken as libelous or something else that involves lawyers. There is the distinct possibility that it would simply make me look like a jerk, and work against the message that I would want to achieve.

A few years ago, I did approach them, and as gently as I could asked if they ever thought to consult a physicist concerning some of the claims in the pamphlet. It's a husband and wife team, and the wife was reasonably conversational. The husband was immediately aggressive and hostile. He questioned the need for such a thing, and when I pointed out a couple of straight-forward errors (not even the efficacy errors) he did not take it well. He even admitted to me, to my amazement, that he didn't care whether the claims were correct!

Another year I gave them a folder I'd prepared about magnetism, and some of the magnetic therapy studies. I even created an email address (brianthephysicist) for any questions they had...I never heard from them.

This year I submitted their website to the FDA website on "Reporting Unlawful Sales of Medical Products on the Internet". I have to admit that that felt good, but I doubt that in reality it will affect very much, if anything at all.

So I am still left with the questions: what should I do with this case? What is my moral obligation, what are my legal limits, what are my options?

Unfortunately, I don't really know.
Posted by bblais at 3:06 PM