I was just alerted to the following video supporting strong action for climate change: 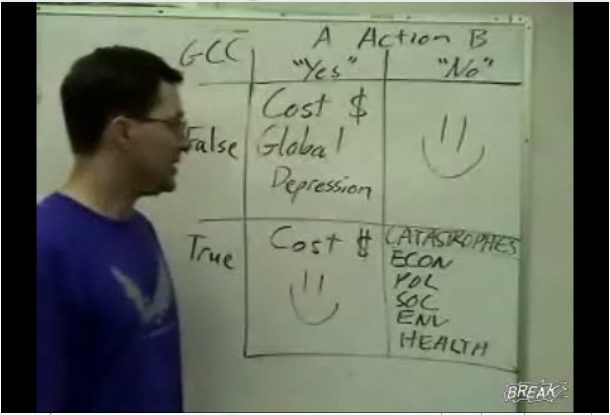 The argument is a little dated, actually, most famously presented in the 1600's well before global warming was a concern. The video uses a rehash of Pascal's wager, replacing personal salvation with policy to deal with climate change. Essentially it states that, if the worst case scenario is very bad, then it is better to deal with that worst case scenario with the possibility of it being a waste of resources, because the alternative (not doing anything and being wrong) is much worse. In Pascal's case, he was arguing for a belief in God. If you believe in God and he doesn't exist, then things aren't that bad (some wasted time and effort). If you don't believe in God and he does exist, then you're in big trouble. The expected value of your reward definitely is maximized by avoiding the worst-case scenario.

There are several problems with this argument, as it applies to global warming, many of which apply to the original argument as well. First, one has to look at the probabilities of the events, and not just their existence. It is true that one of the following two statements is correct:

If we assign probabilities to the individual events, then the correct policy may not be to address point (1), if it is sufficiently unlikely. Further, even if we assume there is global warming, and humans are causing it, both the amount of the warming and impact of the warming are needed for making policy. So, if the warming is most likely 0.5 deg in 100 years, versus 2 deg in 100 years, then the policy choices should be modified accordingly. Even though there may be a slight chance of a catastrophic warming, we do not need to plan for it if the chance is slight enough. Finally, dumping resources into a non-problem is not just a "waste of money", but of lives. The amount of money being discussed here is in the trillions, which can go a long way to fighting problems that we know are here and are a problem (hunger, corruption, extreme poverty, religious extremism, etc...). We have to look at where we need to place resources in the most efficient way to address the many, and serious, problems that we know exist in the world.

Now a similar, but more persuasive motivation for climate change regulation is simple: we are dependent on unstable governments for our energy and our energy sources have serious environmental impacts. These facts are currently costing us two unwinnable wars and an oil spill that will take decades to clean up. If we could divert the costs that go into those wars and industries, and put them into non-fossil fuel alternatives (i.e. nuclear fission and fusion), then we have a chance of significantly improving our national security, environment, and future. So, in dealing with a known, significant problem we can solve another (possible) problem (i.e. global warming) as a bonus.
Posted by bblais at 6:40 PM