There once was a girl named Florida (a.k.a Evil problems in probability)

In a previous post I described the Monty Hall problem, and noted that a simulation can often lead to clarity of thinking on tough probability problems. I take another example here, in two steps, and throw analysis and simulation at it and possibly a bit of intuition.

I was first introduced to this problem from Leonard Mlodinow's "The Drunkard's Walk: How Randomness Rules Our Lives" and immediately "fell for the trap". The problem exists in two parts, the first (easy) part followed by the second (hard) part. The easy part is as follows:

Say you know a family has two children, and further that at least one of them is a girl. What is the probability that they have two girls?


An easy way to do this is to list out the possibilities:

Say you know a family has two children, and further that at least one of them is a girl named Florida. What is the probability that they have two girls?

At first I didn't think it would make any difference. How could knowing the name of the child change the chances for two girls? So I didn't believe the author (at first) that the chances were even, p=0.5, for the family to have two girls. Again we can list off the possibilities: Since the last point is very rare (two girls named the same rare name?) we can ignore it, and we can also see that there are now two Girl-Girl possibilities with one named Florida, rather than just one, so it essentially gets two votes. Thus, we get p=0.5. Now, when I see something like this I worry. Yes, it's intuitive (once you see it) but I've seen slight-of-hand counting of the possibilities before. I don't trust it unless I can do two things: As for the simulation (I post the code below) I get: The formal analysis gets interesting, because I want to understand how the frequency, f, of the name affects the probability of having two girls. If it is a rare name (f ~ 0) then I should get p=0.5. For a common name (f ~ 1) then I should get p=1/3. Not that with f=1 then the word "name" is a little odd because all girls have it, so one might think of it as a label (like "has a nose"). First some notation:

Applying Bayes theorem to the easy problem, we get: 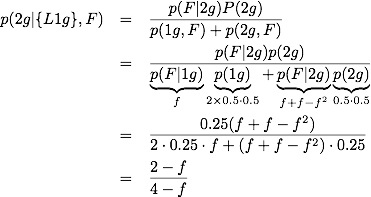 It is easy to check that it has the right limits:

I'm not sure if there is a better way to address this problem, but the analysis and simulation agree, and further we have a very simple form for how the probability depends on the frequency of the known label (e.g. Florida).